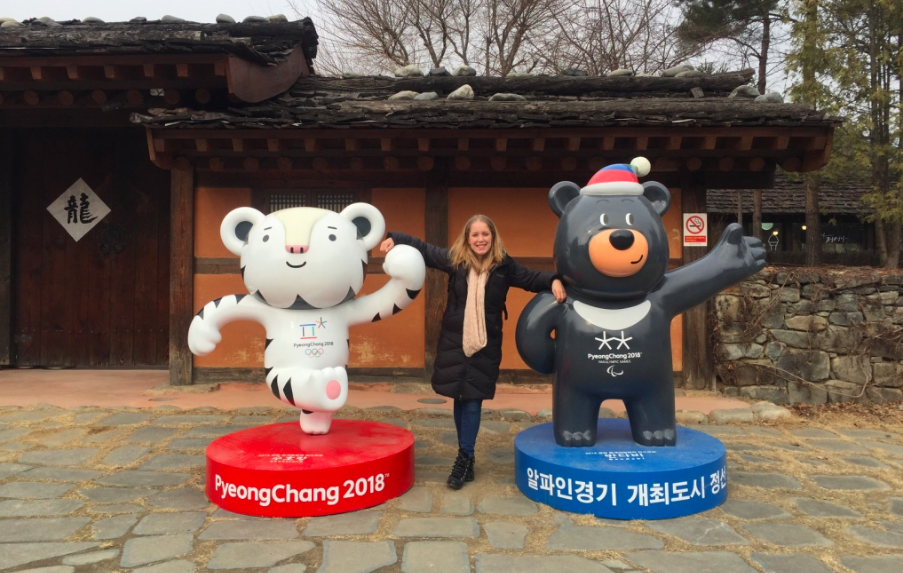 Already two separate Koreans have complimented me on my chopstick skills.

If the rest of the trip winds up a bust I have this much to hold on to, which might not seem like a lot but wait until it happens to you. When a Asian in Asia compliments you on how you use chopsticks it turns your day around, let me tell you that.

As a whole, the Koreans are just about the most friendly people you might encounter. They at least give Canadians a strong run for their money in the friendliness department. I feel like Canadians have a better PR system to tell people about how friendly they are, but Koreans are just humbly friendly. Which might make them better people, actually.

I am, as it turns out, staying with two Koreans. I had no idea this would be the case until I came back to my hotel room on my second day here and opened the door to find them giggling inside. I did not know it was possible to give out two keys to the same room without informing all parties, but apparently at the Olympics it is.

Originally, I thought I was just sharing with my travel partner, an American from USC. We got to our room at about 2:30AM our first night and were pleased to see the main common area broke off into two separate bedrooms, each outfitted with two twin beds.

“This is not so bad,” we said out loud. “It’s sparsely furnished but the upside — there’s a lot of space.” So we pleasantly went to sleep in two separate bedrooms, feeling lucky to have scored such great accommodations. These might have been my final moments of true alone time for the entire month.

My brain continued working as I slept and it was only then that I began to realize it was strange that we had so much space. It’s the Olympics — even athletes share rooms. I had a dream then, a nightmare I would later call it, that strangers came into our room and made us share it with them.

The next day I was walking down the long hallway back to our room after a full day at work — looking forward to some alone time to recharge. The hallway was empty except for two Koreans at the end of it who were just opening a door. It kind of looked like they were opening my door but I couldn’t be sure.

“Just your eyes playing tricks,” I told myself. “That was only a silly nightmare.”

But when I got to my door, which is now our door, I opened it to find them — two Korean roommates.

It turns out they are very nice people. Very, very sweet as nearly all Koreans are. I can’t hate them even though I typically find it very easy to get grumpy in situations like these. They even ordered pizza and fried chicken on the night of the opening ceremonies and translated for us while we watched it on TV. (None of us had tickets). If that’s not the Olympic spirit, I don’t know what is.

So far I have also avoided getting Noro Virus which has not been easy. The guy who sits behind me at our office was struck down by it. One minute, the story goes, he was pleasantly eating an orange. The next minute, he was so violently ill they carted him off in an ambulance. I now spend my days compulsively sanitizing my hands. I’m also afraid to eat fruit. I miss fruit. The first thing I’m doing when I get home is making a salad of freshly washed, Noro Virus-free fruit. Come at me, baby!

I’ve been to a lot of events so far and have some stories coming out about some of them — so keep your eyes peeled and when my stories run I’ll also provide commentary on my blog about what it was like to be, for example, in the stands with North Korean cheerleaders. I bet you’re wondering what that felt like. It’s hard to put words to it, but eerie is probably one of the best descriptors.

Anyway, we’ll get to that. I would get to it now but, it’s the Olympics and I have to run. I can hear that just outside my window the men’s moguls have already started and I want to be there for the finals.

So I’ll run along, but we’ll catch up soon. Thanks to everyone who has been following along!