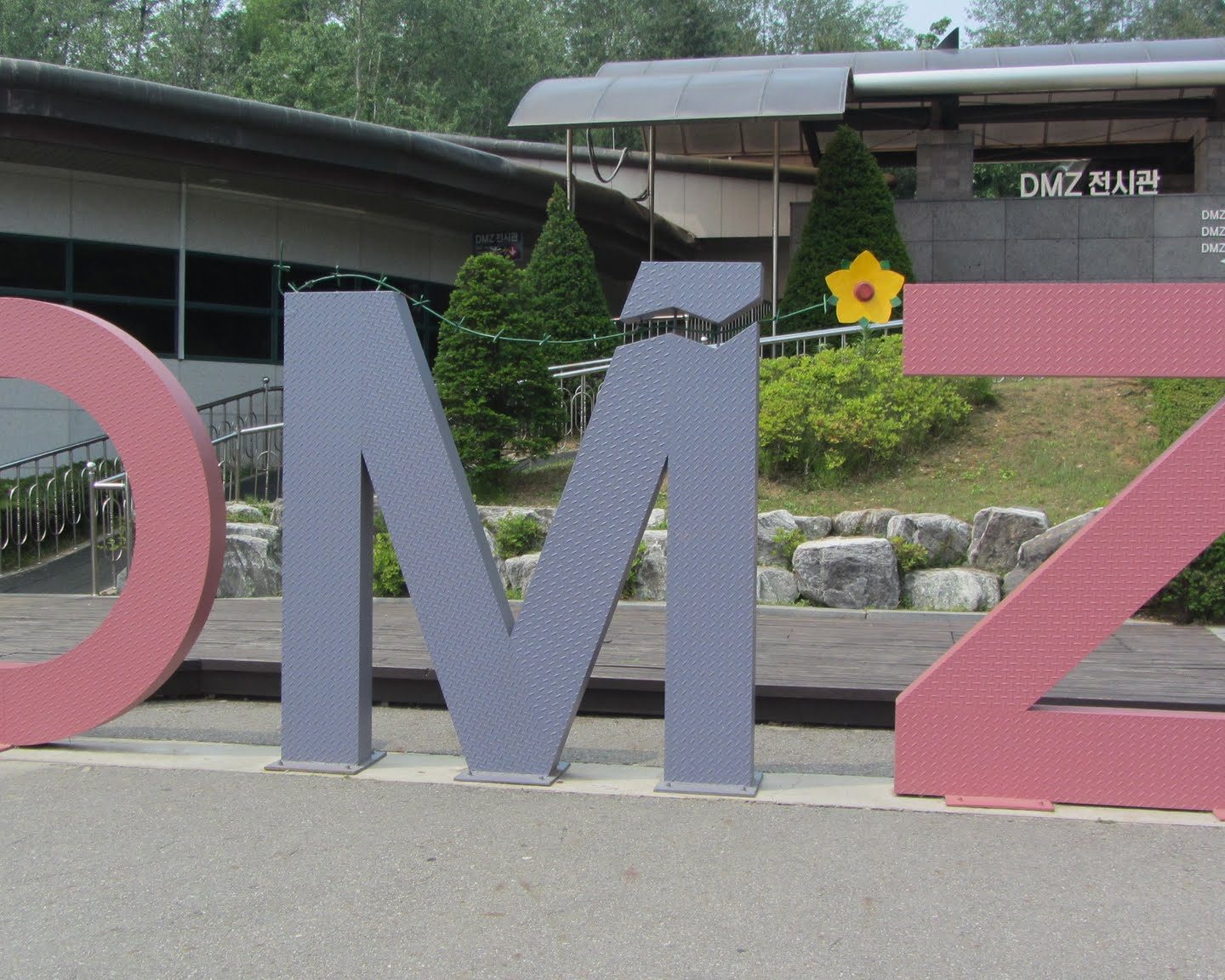 They didn’t let us take photos. No video either.

“Yesterday,” said our guide, “someone tried to sketch a drawing of what they saw.” So during my turn to see North Korea with my own eyes, they made another rule — no notebooks.

“If you get caught with a camera,” said our guide, “I don’t know you.” Discreetly I slid both my phones, which I had been harboring in my pocket, back into my bag. I left the bag on the bus.

Korea has been divided at the 38th parallel since 1953 and we all know how well that has turned out. Between the two Koreas lies a military demarcation line as serious as the Berlin wall. This slicing and dicing of the country was agreed upon between China, North Korea and the United Nations in an effort to bring an end to the Korean War. South Korea still isn’t officially on board with it but regardless they observe a four kilometer expanse of demilitarized territory — two kilometers on the south end of the military demarcation line, and what is theoretically two kilometers on the north. In 1983 North Korea built a new fence near the Sea of Japan (or the East Sea if you ask a Korean) that encroached into the DMZ to the tune of 1.7 kilometers.

Just inland from East Sea on the South Korean side of this expanse sits Observation Tower 717. It is closed to the public and a very active observation post that overlooks the only highway connecting the North and South. For the Olympics, South Korea decided to give tours of this facility to media and athletes and this is how I ended up gazing into the North on an average February day.

A normal tourist can actually stand in a viewing tower a few kilometers back from the DMZ and take pictures of dots on the horizon that they’re told are North Korea. But those were not our plans. We were going to go all the way in.

They checked us three times before they let us in, counting and recounting us and letting the buses drive forward before calling them back and recounting us again. Finally we were allowed through a concrete and barbed wire gate and drove on a winding road through a forest to the top of a hill.

“There are many mines in this forest,” our guide said. A South Korean soldier had reportedly lost his legs to one just a few years prior.

On our way up I glanced a sign out the window. “DMZ Southern Boundary,” it read.

We got out of the bus at the top of a hill and immediately were greeted to that blaring K-pop you always hear about. I’m told they only play it when the North is broadcasting anti-South propaganda. I can’t decided which would be worse. Just kidding, I love K-pop.

A South Korean soldier led us up a low staircase to the briefing room at the top of the tower. With its floor to ceiling windows it felt like walking into someone’s home with a really great view. Only in this case the view was of North Korea.

The part of North Korea I saw was really beautiful. The East Sea is aquamarine where it meets the island-dotted coast and its inviting waters gently lap on the shores of a white sand cove just across the demarcation line. A small lake sits nestled between various mountains and since the DMZ has been untouched for decades its a defacto nature preserve, almost peaceful looking.

“Sometimes we see North Korean soldiers fishing in the lake,” said the soldier during his briefing. It’d be impossible to spot them with the naked eye but this is the military we’re talking about and they have powers. Through their massive windows the South Koreans use high powered cameras to spot their counterparts on the other side. The feed runs to a TV screen and they can zoom in far enough that what originally looked like regular mountain rock begins to reveal itself as a bunker and what looked like a small house ends up being a guard tower with North Korean flags and a North Korean soldier doing exercises outside.

After the briefing we were allowed outside on the observation deck where it was cold and windy and wintery in every way. It was rather serious and somber thinking about everyone locked in that land and the gross human rights injustices they experience daily. In North Korea, if you didn’t know, there is a system of concentration camps. Sometimes I worry the cheerleaders who were at the Olympics will get sent to them. That’s what happened to 21 of them in 2006 when they returned from South Korea and talked about it.

While I was thinking these thoughts the K-pop skipped. It was awkward. I didn’t want our anti-propaganda efforts to be outstripped due to technical difficulties. Luckily it seemed it was just one speaker that went down. Pleased to report the K-pop carried on at top volume throughout the tower.

They counted us twice again before they let us leave and it was miles down the road before I felt it was appropriate to take photos again.

I thought about the guard I spotted as we traveled home. Wondered what his life was like, what bed he went home to, what kind of food he ate for lunch. I wondered, as we traveled, what had the North Korean guards who had undoubtedly been eyeing us through high powered cameras of their own thought when they spotted me?